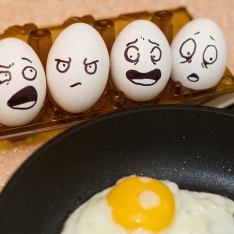 It was burned beyond recognition. She kicked open the front door and threw the dinner (with the pan) as far as she could out into the four-foot snow. The next Spring, the pan was found clean as a whistle. This old figure of speech describes the whistling sound of a sword as it swishes through the air to decapitate someone. If dinner guests were present, she might have done that. Her anger/frustration was at level red: severe risk threat level.

And then there was the time she had eighteen Thanksgiving dinner guests. She had recently moved into this house with one office chair and a double bed. The previous home was a sailboat. Not having enough silverware or dishes to pull this off was nothing compared to the dining room construction zone that hubby created one week prior to the event. Of course. That’s what guys do. A wall was knocked out with heavy, clear plastic hanging on both sides to contain the plaster radio-active fall-out. Such a nice backdrop to the feast. She was hoping the flowers would catch the attention of her guests instead. Big flowers! It gets better. The 1957 oven with a broken door hanging by one hinge was so small that only the turkey would fit. This complicated the cooking. The cook did not need complications. Figuring out the menu itself was overwhelming, much less how to cook it. But she persevered and even made homemade cheese garlic rolls. Which she placed in the cabinet above the oven to rise. All said and done, the guests were seated and passing the food around. Soon thereafter, a guest remarks that there’s something in the rolls. The hostess said yes, there is. It’s cheese. The guest responded, “No, I think it’s saran wrap.” It was. Dolly Domestic forgot to remove it prior to baking. She immediately made the rounds with the garbage can to collect any and all well-preserved rolls. Funny? Yes. Embarrassing? Double yes. She hasn’t gotten over it. Last Thanksgiving consisted of no guests, sub sandwiches (made with turkey, cranberry sauce, stuffing, and gravy) and binge TV. Delightful!

Let’s move on to Christmas. Girlfriends flew in to do a holiday bazaar-like baking extravaganza that became bizarre. Like peanut brittle soooooo stuck to the pan that the candy makers were whacking the pans as hard as they could on the counter edge. To no avail. She suggested that we just make the pan as part of the gift. Vetoed.  How about using the pans as baseball bats (brittle ball)? Vetoed. Never again.

Let’s turn up the heat. Guys…you’re supposed to be the masters of the holy grill. Why is it that when something is burned outside, it’s acceptable? Called “blackened”. “He’s great on the grill.” Even though you can’t recognize what you’ve just been served. Granted, grilling IS harder than cooking inside. It’s that intense, conductive heat that is the challenge. But…if she burned something that bad inside, nobody would eat it. Call for pizza!

The she is me. No more dinner disasters. No more bitching in the kitchen. No more brunch crunch. No more roux without a clue. Ad infinitum. It’s all been replaced with confidence, calm,  good-looking cooking and the joy of cooking. How? http://webcookingclasses.com  Chef Todd Mohr: passionate, hilarious, culinary school instructor whose techniques make you remember what you learned. He makes cooking fun! Lifetime Membership is the only way to go. This is the best investment I’ve ever made. You have to eat. Why not make it exceptional? And fun. I’m talking to the guys here, too. You may outnumber us in this class…

To inspire you, just a few things I learned in the very first class:

That’s a lot of potatoes. Hungry for more? Check it out.